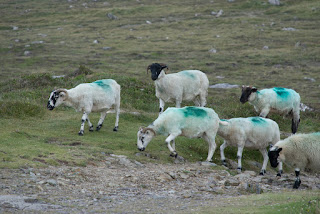 Welcome to a little liturgy.  This week we return to thinking of ourselves as sheep.  I hope you find something thought provoking below.

Summary of Liturgy of the Word

First Reading
Jeremiah 23:1-6
Jeremiah tells us of God's message about his sheep.  God says that his sheep have been scattered and not cared for properly but that he intends to gather them back together.  He says that he will also raise a new king who will practise "honesty and integrity".

Psalm 22
The Lord is my shepherd; there is nothing I shall want.

Gospel
Mark 6:30-34
The apostles were tired from preaching so Jesus took them by boat to a quiet place to rest.  However, word spread and their followers had already arrived ahead of them.  There was now a large crowd.  Jesus took pity on them because "they were like sheep without a shepherd".  He spent time teaching them himself.

Sheep without a shepherd lack a purpose and any sense of direction.  From very early days, as shown in today's reading from Jeremiah, the idea that the people were like sheep in relation to God was familiar.  This imagery is taken up in the New Testament and confirms for us the relationship between God the Father and God the Son who are both cast as shepherds.
Today we cannot see the shepherd but are familiar with his words and directions.  Being led by a shepherd also makes us one of a whole flock.  Sometimes this can be troubling; indeed it is not a great compliment to be called a "sheep."   Even though, as members of Christ's church, we have many essential things in common, we do not always have to behave in exactly the same way.

Paragraph 1776 of the Catechism notes:  "Deep within his conscience man discovers a law which he has not laid upon himself but which he must obey. Its voice, ever calling him to love and to do what is good and to avoid evil, sounds in his heart at the right moment. . . . For man has in his heart a law inscribed by God. . . . His conscience is man's most secret core and his sanctuary. There he is alone with God whose voice echoes in his depths."

This voice calling could be rather like a shepherd.  It is interesting to think about what exactly we mean by conscience and how we develop a conscience.  Of course what ultimately makes us part of the flock is our willingness to follow the Good Shepherd and trust in him.

Activities during the homily

Look again at the Psalm - it is probably the most well loved psalm.  Draw out the images below:

Match these pictures with the verb phrases below:

A.  drinking from
B.  reposing in
C.  dwelling in
D.  being guided along
E.  eating

All these activities are pleasant and comforting.  They are associated with caring and giving protection.  The psalmist says that even if he had to walk through "the valley of darkness" he would not be afraid.  This is what Jesus gives us as the Good Shepherd.  He gives us a confidence that we will be cared for and that with him we should not fear evil.

For a lovely rendition of Psalm 23 click on to youtube here. The more traditional version can be sung along to here.

I hope you have a good week.